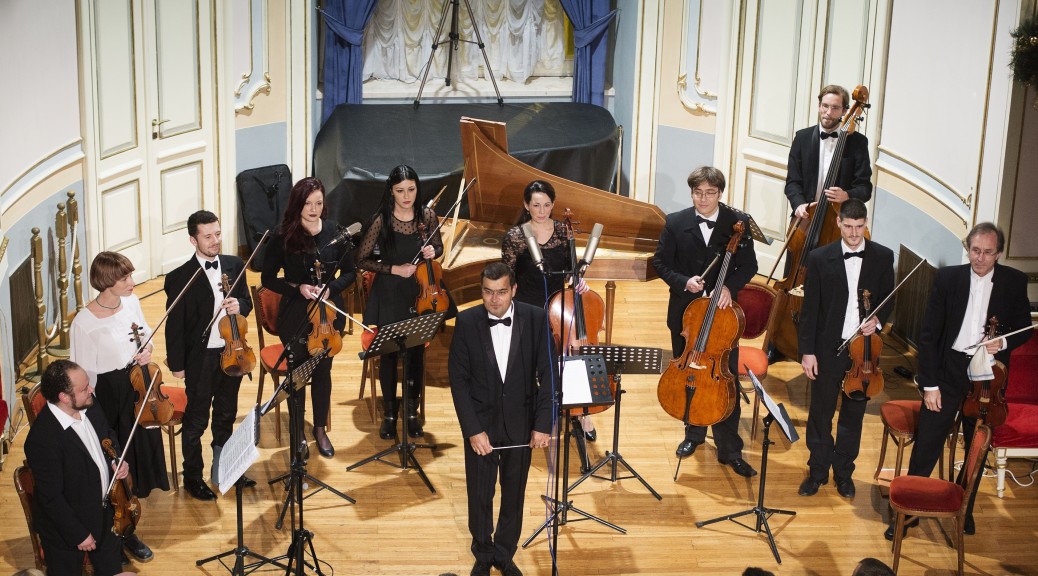 THE VIRTUOSOS OF SPLIT – SPLITSKI VIRTUOZI On the initiative of the Music and Art Association Artemis, Jeunesse Musicales and the Music Department of the Art Academy of the University of Split, prominent professional musicians from Split, led by violist and conductor Wladimir Kossjanenko, came together and founded in 2012 an chamber orchestra in Split with continuous concert activities in Croatia and abroad.

For high artistic level of the Ensemble are responsible multi-award winning international musicians with decades of international concert experience at the same time professors at the Academy of Arts, University of Split. The President of Croatia immideately assured the new ensemble his high patronage for the first concert season .

The Viruosos of Split quickly become a sounding visit card and a musical ambassador of the historical City founded around 300 AD by the Roman Emperor Diocletian and UNESCO-protected capital of Dalmatia. Numerous concerts in Croatia and abroad performed in cooperation with international soloists received enthusiastic reaction of the audience and ctitics such as: „Standing ovations for the Virtuosos with heart!“ (Hellweger Anzeiger, Germany), „The Virtuosos justified the Name“ (Novi List, Croatia), „If you hold the attention of the audience permanently in your hands like that – you can be sure, you have achieved a special experience of Art“ (Free Dalmatia, Croatia).

The Virtuosos of Split play a role of an active link between European and international cultural centers and Croatian musical tradition. Promotion of Croatian music abroad as well as presentation of the European musical achievements in Croatia belong to the long-term artistic strategy of the Ensemble.

The Virtuosos of Split were invited to the International Festival “Celloherbst am Hellweg” – “Cello-Autumn in Hellweg” in North Rhine-Westphalia (Germany), where their recent performances were accompanied by great enthusiasm of the audience, “standing ovations” and critical acclaim.

Special attention of the founding members of the Virtuosos Split is directed towards the education of musicians of the younger generation through active participation in the preparation of concert programs of the ensemble as well as the organization of seminars and workshops.

Excerpts from the reviews:

– “Virtuosos with a heart”; “Standing ovations for the Virtuosos of Split, who inspire with a “Venetian night ” in the church on the square!” – HELLWEGER ANZEIGER

– “With cello and violin to the Adriatic Sea!”; “Virtuosos of Split filled Heeren Castle with Mediterranean spirit. Delicate and gentle sounds of strings took the audience on an interesting journey through Venice.” – HELLWEGER ANZEIGER

– “When you hold the audience in your hand during the performance of delicate movements that often followed this concert, then you know that you have achieved art”;
– “The ensemble is made up of strong musical personalities”; “Virtuosos of Split justify name”;
– “Virtuosos of Split can be imagined as one of the season holders of a Split concert hall”;
– “New rise of Virtuosos of Split with excellent soloists”; “To know the year by Virtuosi” – FREE DALMATIA

– “The Virtuosos of Split delighted with their string art”; “Church of St. Cross in Tvrđa was almost too small to accommodate all those who wanted to watch and listen to the guest performance of the string chamber orchestra Virtuosos of Split”– OSIJEK ONLINE

– “Edin Karamazov was excellently accompanied by excellent Virtuosos of Split”; “The only concert in Croatia dedicated to the historical event of the 25th anniversary of the fall of the Berlin Wall was performed last night by the chamber orchestra “Virtuosos of Split”under the direction of maestro Wladimir Kossjanenko” – CULTURE NEWS, HTV1

– “Domoljub Hall in Koprivnica opened its doors again with a beautiful concert of the Virtuosos of Split “ – DANICA.HR

Detailed information about the concert activities of Split virtuosos with numerous videos of the ensemble is available in Croatian, English and German on this website and at www.facebook.com/TheVirtuososofSplit/